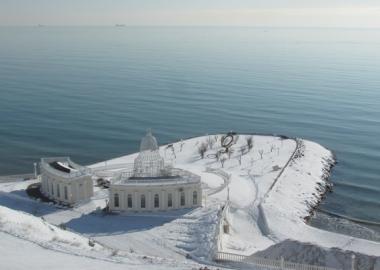 During the snowfall, the drive of the residents to their homes was promptly provided.
To prevent emergencies and ensure comfortable movement around the cottage community , the roads were sprinkled with sand and salt mixture.

After snowfall, streets were cleaned daily, both using machines and manually.
Central Alley (Orekhovaya Street) was cleaned 6 times a day.
The streets in the upper part of the cottage community  - 3-6 times a day.
Pedestrian zones - 1-2 times a day (as and when it snows).
Slopes, the quay, sea streets - as and when it snows.
After the complete restoration of traffic and pedestrian movement, special attention was paid to the storm sewerage system.
Prompt cleaning of snow from the trays allowed melt water to naturally move to the storm sewerage system.