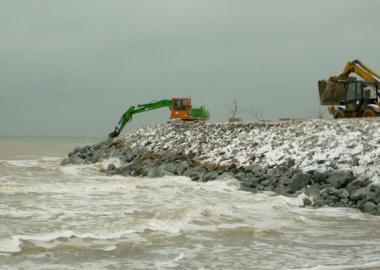 The storm in Odessa.

This year, the winter brought a lot of "unpleasant" weather surprises:
repeated strong storms and stormy wind. All this made the management company adjust its scheduled work. We had to shift the schedule of preparation for the summer and urgently eliminate the consequences of force majeure circumstances: to reconstruct the rock-filled part of the dam dikes and restore the area of the noise-proof wall.

The sea was especially unpredictable.

The force of storms often exceeded estimated seasonal values, as a result of which the entire Black Sea coast was affected. So, in some parts of Odessa the beaches were washed up to the supporting slabs (district 16, Big Fountain station).

The coast of the cottage community  «Pine Coast»was also affected by the storms. However, the beach area has been preserved thanks to shore protection works performed earlier. Storm waves affected mainly rock-filled part of the dam dikes holding the beach. The monitoring showed partial damage to the drop-fill rock.

Restorative work was conducted regardless of the weather conditions.